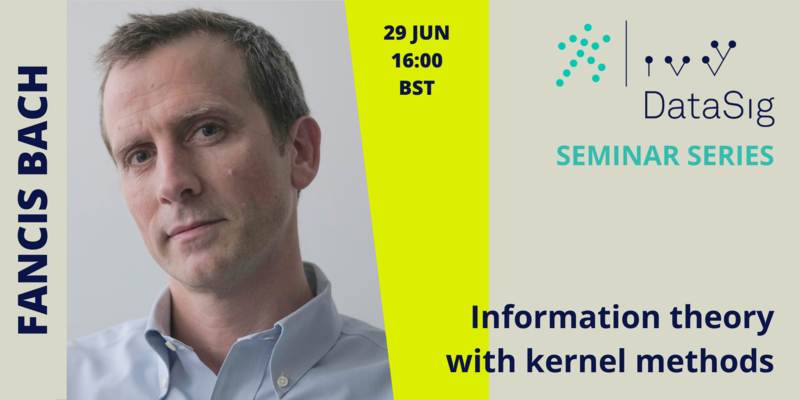 I will consider the analysis of probability distributions through their associated covariance operators from reproducing kernel Hilbert spaces. In this talk, I will show that the von Neumann entropy and relative entropy of these operators are intimately related to the usual notions of Shannon entropy and relative entropy, and share many of their properties. They come together with efficient estimation algorithms from various oracles on the probability distributions. I will also present how these new notions of relative entropy lead to new upper-bounds on log partition functions, that can be used together with convex optimization within variational inference methods, providing a new family of probabilistic inference methods (based on https://arxiv.org/pdf/2202.08545.pdf, see also https://francisbach.com/information-theory-with-kernel-methods/).

Francis Bach is a researcher at Inria, leading since 2011 the machine learning team which is part of the Computer Science department at École Normale Supérieure. He graduated from École Polytechnique in 1997 and completed his PhD in Computer Science at the University of California, Berkeley in 2005, working with Professor Michael Jordan. He spent two years in the Mathematical Morphology group at École des Mines de Paris, then he joined the computer vision project-team at Inria / École Normale Supérieure from 2007 to 2010. Francis Bach is primarily interested in machine learning, and especially in sparse methods, kernel-based learning, large-scale optimization, computer vision and signal processing. He obtained in 2009 a Starting Grant and in 2016 a Consolidator Grant from the European Research Council, and received the Inria young researcher prize in 2012, the ICML test-of-time award in 2014 and 2019, as well as the Lagrange prize in continuous optimization in 2018, and the Jean-Jacques Moreau prize in 2019. He was elected in 2020 at the French Academy of Sciences. In 2015, he was program co-chair of the International Conference in Machine learning (ICML), and general chair in 2018; he is now co-editor-in-chief of the Journal of Machine Learning Research.