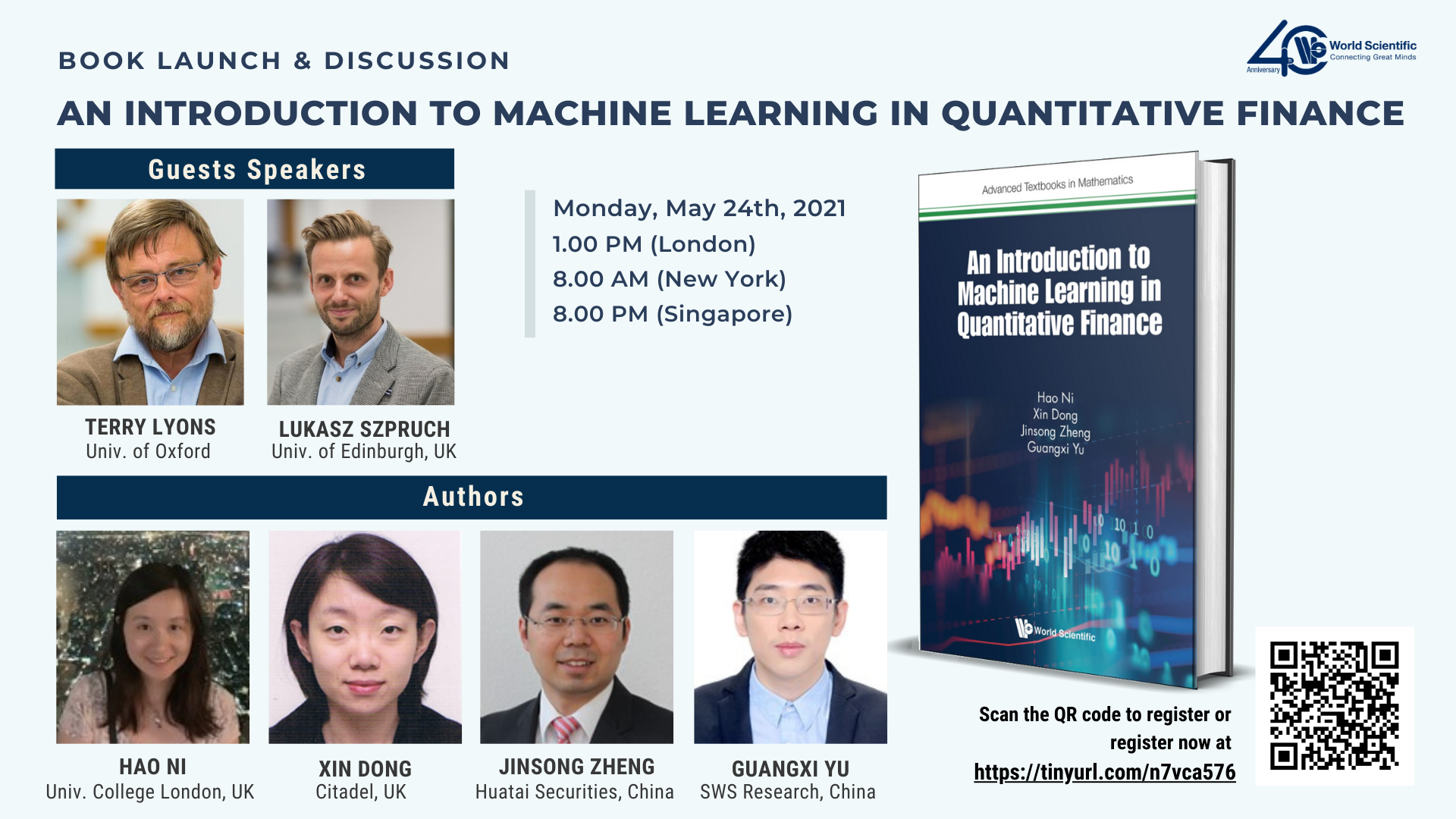 We are delighted to invite you to a webinar celebrating the launch of “An Introduction to Machine Learning in Quantitative Finance”. Over the past few years, Machine Learning (ML) has gradually permeated the financial sector, reshaping the landscape of quantitative finance as we know it. This book aims to demystify ML by uncovering its underlying mathematics and showing how to apply ML methods to real-world financial data. More details at https://doi.org/10.1142/q0275.

During the panel discussion, the guest speakers will be joining the authors in sharing their insights into the future of machine learning in quantitative finance.

Professor Terry Lyons is the Wallis Professor of Mathematics; he is currently PI of the DataSig program (primarily funded by EPSRC), he was a founding member (2007) of, and then Director (2011-2015) of, the Oxford Man Institute of Quantitative Finance; he was the Director of the Wales Institute of Mathematical and Computational Sciences (WIMCS; 2008-2011). He came to Oxford in 2000 having previously been Professor of Mathematics at Imperial College London (1993-2000), and before that he held the Colin Maclaurin Chair at Edinburgh (1985-93).

Hao Ni is an associate professor in financial mathematics at University College London (UCL) and a Turing Fellow at the Alan Turing Institute since September 2016. Prior to this, she was a visiting postdoctoral researcher at ICERM and Department of Applied Mathematics at Brown University from September 2012 to May 2013. She continued her postdoctoral research at the Oxford-Man Institute of Quantitative Finance until 2016. She finished her DPhil in Mathematics at the University of Oxford. Her research interests include stochastic analysis, financial mathematics, and machine learning.

Xin Dong is currently a quantitative researcher working at Citadel Securities in London since 2018. She was a desk strategist at Morgan Stanley in London from 2014 to 2018. Prior to that, she finished her PhD focused on point processes in the Department of Mathematics at Imperial College London in 2014. Her current research interests are on quantitative trading.

Jinsong Zheng is an algorithm engineer at Huatai Securities in China since 2019. Prior to this, he was a quantitative risk manager at Talanx AG in Germany. He got his PhD in Economics at the University of Duisburg Essen. He has extensive work experience in quantitative risk management and financial modelling. His current research interests are quantitative investment and asset allocation, especially using machine learning techniques and big data.

Guangxi Yu is a quantitative analyst at SWS Research in China. His current research includes financial data analysis, quantitative modelling and equity strategies. He is especially interested in machine learning applications in finance. Prior to this, he obtained his Master's degree in Financial Mathematics at University College London under the supervision of Dr Hao Ni.