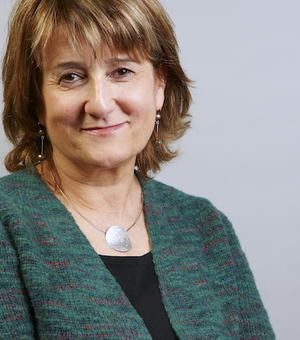 President of the European Mathematical Society

Marta Sanz-Solé  is a Catalan mathematician specializing in probability theory. She obtained her PhD in 1978 from the University of Barcelona under the supervision of David Nualart.

Sanz-Solé is professor at the University of Barcelona, and member of the research group on stochastic processes. Prior to taking up her post at the UB, she was associate professor at the University Autònoma of Barcelona. She was Dean of the Faculty of Mathematics UB from 1993-1996, and Vice-president of the Division of Experimental Sciences and Mathematics from 2000-2003.

Her research interests are in stochastic analysis, in particular stochastic differential and partial differential equations. She has published more than 95 scientific articles and a monograph on Malliavin calculus and applications to SPDEs. In 1998 she was awarded with Narcis Monturiol Medal of Scientific and Technological Excellence by the Generalitat of Catalonia. In 2011 she was elected Fellow of the Institute of Mathematical Statistics and in 2016, member of the Institute of Catalan Studies.  In 2017, she was appointed honorary collegiate of the Collegial of Economics of Catalonia, and was awarded the Real Sociedad Matemática Española Medal [15] for her scientific contributions and relevant international positions and service. Since 2019, she is also a member of the Barcelona Royal Academy of Sciences and Arts .

Sanz-Solé served in the Executive Committee of the European Mathematical Society in 1997-2004. She was elected President in 2010, and held the post from January 2011 to December 2014. She is or has been a member of several international committees overseeing the mathematical sciences. In particular, the Board of Directors of the Institut Henri Poincaré, the FSMP (Fondation Sciences Mathématiques de Paris), the committee for research and education of the École Polytechnique, and the Scientific Committee of CIRM (Centre des Rencontres Mathématiques, Luminy, France). In the past years, she served in the Scientific Council of the Banach Center (2010-2014), the Fellows Committee of the Institute of Mathematical Statistics (2012-2014), and the Committee of Special Lectures (2008-2010). She was a member of the Board of Directors of the Centre de Recerca Matemàtica (Bellaterra, Barcelona) for a three-year period, starting April 2007. In June 2015, she was appointed member of the Abel Committee for the Abel Prize 2016, 2017. Between May 2018 and October 2019, she has been the Director of the Graduate School of Mathematics (BGSMath).