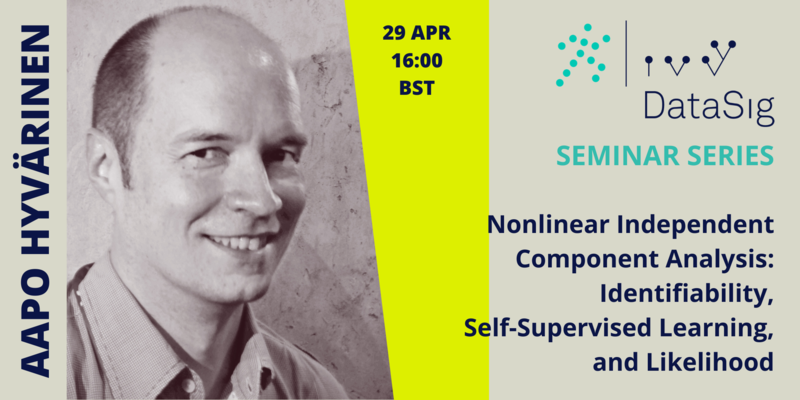 Unsupervised learning, in particular learning general nonlinear representations, is one of the deepest problems in machine learning. Estimating latent quantities in a generative model provides a principled framework, and has been successfully used in the linear case, especially in the form of independent component analysis (ICA). However, extending ICA to the nonlinear case has proven to be extremely difficult: A straight-forward extension is unidentifiable, ie it is not possible to recover those latent components that actually generated the data. Recently, we have shown that this problem can be solved by using additional information, in particular in the form of temporal structure or some additional observed variable. Our methods were originally based on "self-supervised" learning increasingly used in deep learning, but in more recent work, we have provided likelihood-based approaches. In particular, we have developed computational methods for efficient maximization of the likelihood for two variants of the model, based on variational inference or Riemannian relative gradients, respectively.

Aapo Hyvärinen studied undergraduate mathematics at the universities of Helsinki (Finland), Vienna (Austria), and Paris (France), and obtained a PhD degree in Information Science at the Helsinki University of Technology in 1997. After post-doctoral work at the Helsinki University of Technology, he moved to the University of Helsinki in 2003, where he was appointed Professor in 2008, at the Department of Computer Science. From 2016 to 2019, he was Professor at the Gatsby Computational Neuroscience Unit, University College London, UK. Aapo Hyvärinen is the main author of the books "Independent Component Analysis" (2001) and "Natural Image Statistics" (2009), Action Editor at the Journal of Machine Learning Research and Neural Computation, and has worked as Area Chair at ICML, ICLR, AISTATS, UAI, ACML and NeurIPS. His current work concentrates on unsupervised machine learning and its applications to neuroscience.