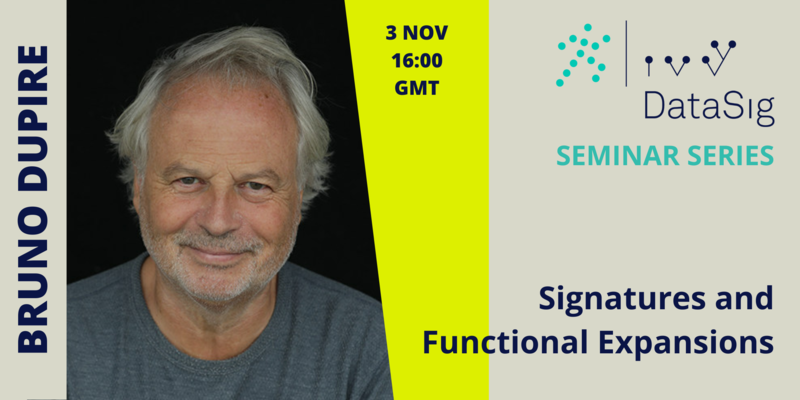 European option payoffs can be generated by combinations of hockeystick payoffs or of monomials. Interestingly, path dependent options can be generated by combinations of signatures, which are the building blocks of path dependence. We focus on the case of 1 asset together with time, typically the evolution of the price x as a function of the time t. The signature of a path for a given word with letters in the alphabet {t,x} (sometimes called augmented signature of dimension 1) is an iterated Stratonovich integral with respect to the letters of the word and it plays the role of a monomial in a Taylor expansion. For a given time horizon T the signature elements associated to short words are contained in the linear space generated by the signature elements associated to longer words and we construct an incremental basis of signature elements. It allows writing a smooth path dependent payoff as a converging series of signature elements, a result stronger than the density property of signature elements from the Stone-Weierstrass theorem. We recall the main concepts of the Functional Itô Calculus, a natural framework to model path dependence and draw links between two approximation results, the Taylor expansion and the Wiener chaos decomposition. The Taylor expansion is obtained by iterating the functional Stratonovich formula whilst the Wiener chaos decomposition is obtained by iterating the functional Itô formula applied to a conditional expectation. We also establish the pathwise Intrinsic Expansion and link it to the Functional Taylor Expansion.

Bruno Dupire is head of Quantitative Research at Bloomberg L.P., which he joined in 2004. Prior to this assignment in New York, he has headed the Derivatives Research teams at Société Générale, Paribas Capital Markets and Nikko Financial Products where he was a Managing Director. He is best known for having pioneered the widely used Local Volatility model (simplest extension of the Black-Scholes-Merton model to fit all option prices) in 1993 and the Functional Itô Calculus (framework for path dependency) in 2009. He is a Fellow and Adjunct Professor at NYU and he is in the Risk magazine “Hall of Fame”. He is the recipient of the 2006 “Cutting edge research” award of Wilmott Magazine and of the Risk Magazine “Lifetime Achievement” award for 2008.