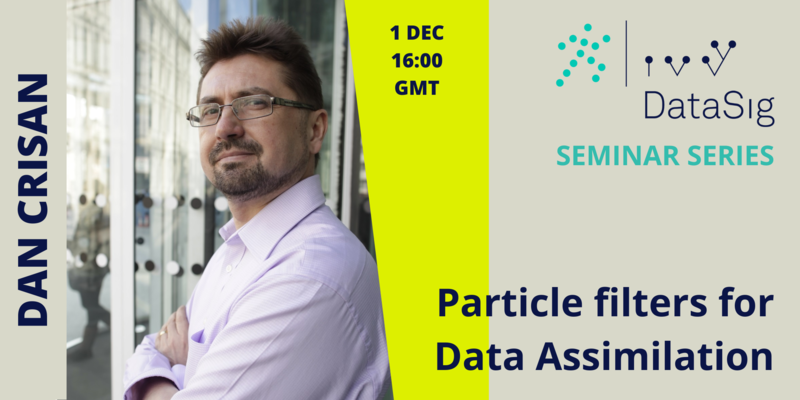 Modern Data Assimilation (DA) can be traced back to the sixties and owes a lot to earlier developments in linear filtering theory. Since then, DA has evolved independently of Filtering Theory. To-date it is a massively important area of research due to its many applications in meteorology, ocean prediction, hydrology, oil reservoir exploration, etc. The field has been largely driven by practitioners, however in recent years an increasing body of theoretical work has been devoted to it. In this talk, In my talk, I will advocate the interpretation of DA through the language of stochastic filtering. This interpretation allows us to make use of advanced particle filters to produce rigorously validated DA methodologies. I will present a particle filter that incorporates three additional add-on procedures: nudging, tempering and jittering. The particle filter is tested on a two-layer quasi-geostrophic model with O(10^6) degrees of freedom out of which only a minute fraction are noisily observed.

Dan Crisan is a Professor of Mathematics at Imperial College London. He obtained his PhD in 1996 from the University of Edinburgh. After brief stints at Imperial and Cambridge, Crisan was awarded a Governors’ Lectureship at Imperial in 2000. Crisan’s research lies in the broader area of Stochastic Analysis a topic at the interface between Mathematics Analysis and Probability Theory. He is particularly interested in studying macroscopic models such as solutions of partial differential equations through their microscopic and stochastic counterparts. Some of his key contributions relevant to the proposed research include: the theoretical justiﬁcation for particle approximations for linear parabolic SPDEs; a sequential Monte Carlo method stable in the state space dimension; a reﬁned analysis of the smoothness of solutions of semi-linear PDEs, a new McKean-Vlasov approximation for the Kushner-Stratonovich equation. Crisan has been a staunch advocate of the development of rigorously validated data assimilation methodologies.